Sanganai/Hlanganani international tourism buyers that visited the eastern bloc tourism last week Friday to Sunday have expressed great interest in the unique packages that the Eastern Highlands has to offer, Easterntimeszim has learnt.

A 10-member delegation of buyers from Germany, United States of America, India, South Africa and Tanzania toured the Eastern Highlands last weekend as a precursor of the 15th edition of the Sanganai/Hlanganani – World Tourism Expo that will be held at the Zimbabwe International Exhibition Centre in Bulawayo running from tomorrow (Thursday) up to Saturday.

The Sanganai/Hlanganani – World Tourism Expo is an annual tourism trade fair organized by the Zimbabwe Tourism Authority (ZTA) which has over the years grown to become one of Africa’s premier tourism business exchange forums. It showcases the widest variety of Africa’s best tourism products and attracts international visitors and media from across the world.

Coined the Switzerland of Africa because of its majestic mountainous terrain and densely vegetated forests, the Eastern Highlands was described by the international buyers as a sleeping tourism giant with great potential. On Friday the group first toured Nyanga district where they visited Nyanga National Park and hiked up Mount Nyangani, which is Zimbabwe’s highest mountain (2,592m). They also visited the breathtaking Nyangombe Falls in Nyanga and Mtarazi Falls in Mutasa district. At 772 metres, Mtarazi Falls is the highest falls in Zimbabwe, the second highest in Africa and 17th highest in the World.

The buyers also experienced trout fishing at Troutbeck Hotel in Nyanga as well as horse riding and a sunset boat cruise. The World’s View in Nyanga, where one can see far-reaching scenic views of Mutasa and Nyanga district from a high peak was another fascinating experience for the buyers which they considered to be breathtaking and unique.

From there, they had a site inspection of Far and Wide cottages in Mtarazi National Park and visited the exclusive SkyDeck Mountain luxury lodge which is remarkably perched on the edge of the Honde Valley escarpment, whilst some tried out the skywalk and zip-line activities over the scenic Pungwe gorge at Mtarazi Falls.

On Saturday after spending the night at Troutbeck Hotel the visitors traveled to Mutare, the capital of Manicaland Province where they visited the National Art Gallery of Manicaland and the Mutare museum before going for outdoor activities. From there the buyers went to Lake Alexander in Mutasa South about 42 kilometres from Mutare and had a speed boat ride at Small Bridge Dam and Lake Alexander. Afterwards they had a firsthand African barbecue braaing experience at Lake Alexander Country Resort, a new luxury resort overlooking the lake which is now near completion and is expected to be officially opened soon before the end of this year.

On Sunday after sleeping in Mutare in the luxurious Holiday Inn Mutare hotel situated at the heart of Mutare, the visitors took off to tour the breathtaking, picturesque Vumba resort area, 25km south east of Mutare. They inspected some of the serene havens in the mountainous area known for hiking, mountain biking, birdwatching and scenic drives, before checking in at the monumental Leopard Rock Hotel where they also enjoyed a close contact game viewing experience of Ostriches, Zebras and Giraffes among many other herbivorous animals in the game park. On Monday they left for Masvingo in transit to Bulawayo for the expo, but were also expected to visit some tourism attractions there such as the Great Zimbabwe and Kyle Dam wall among many others.

ZTA eastern region area manager Ropafadzo Dunira said the Sanganai/ Hlanganani pre-tours are important to market little known destinations such as the Eastern Highlands that has a lot to offer, but often overshadowed by iconic destinations such as Victoria Falls. Dunira added that the eastern bloc will host two more groups after the Sanganai/ Hlanganani Expo.

“This year’s Sanganai/Hlanganani World Tourism Expo comes at a time our tourism is recovering from the covid-19 pandemic. The thrust is to showcase to the international tourism buyers that we are a safe tourism destination and ready to receive visitors again,” she said.

Adding, “We are taking buyers on tour to meet with service providers, show them our products and services including the new upcoming facilities in the region. Buyers were impressed with the Eastern Highlands and we are happy to continue working with local tourism operators to boost our tourism in Zimbabwe.” 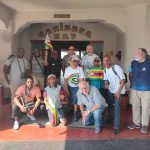 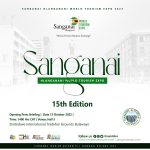